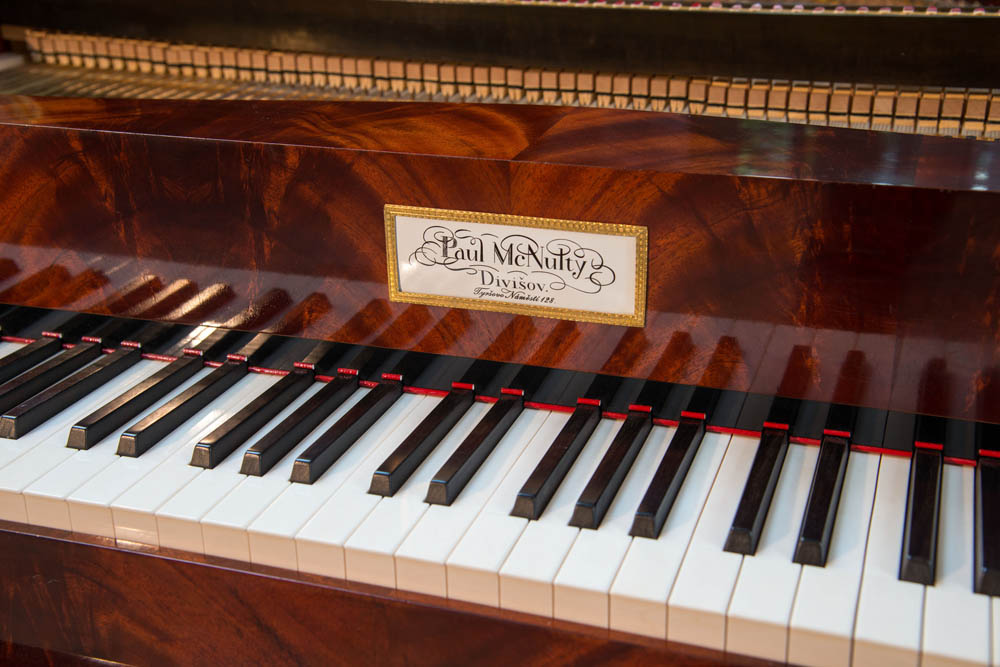 Most dedicated listeners but also more casual fans of classical music have at some point wondered about the sound of early musical instruments once played by the great composers. The question of how historic instruments might have sounded veritably haunted Russian pianist Anton Rubinstein, who lamented that while some instruments that had survived in museums they had long lost their original colour and tone. The result was that nobody really knew any longer which techniques had been used in their production, or what their exact sound was like. That knowledge and experience had been lost.

Hearing music from the classical period performed on the modern piano requires the understanding that through the centuries something was forgotten. Mozart composed for the modern piano’s predecessor, the fortepiano, which later came to be regarded as obsolete. It was only in the second half of the 20th century that a serious interest in Early Music and historic instruments was revived. One who had an interest in Early Music was American-born fortepiano builder Paul McNulty; in the 1980s, he was attracted to historic designs including keyboards by Viennese maker Anton Walter, who had built pianos for Wolfgang Amadeus Mozart. It became his life’s work.

Not long ago, I met with Paul at his workshop and home in the village of Divišov, south of Prague, where he and his wife, the acclaimed fortepianist Viviana Sofronitsky, run McNulty Fortepianos, building clones of historic pianos with the utmost precision. Building an historic instrument, approximating the sound of early instruments, is the one of the most important goals for both. Originally, McNulty trained to be a guitarist, but things turned out differently.

Paul McNulty: “I think I was the hardest-working music student at Peabody Conservatory for a couple of years! But in my second year my teacher said ‘Gee, Paul, I don’t know about your senior recital…’ And that was my last lesson because the writing seemed to be on the wall. I went from that to a very brief career as a graveyard-shift parking lot attendant where I read a lot of books including the great Studs Terkel book ‘Working’”, in which the happiest guy was the piano tuner.

“And that very morning, after my shift, I walked up to the conservatory to ask the piano tuner where I could go to school. He told me ‘Boston’ and when I had made arrangements I hitchhiked over there and I passed the exam and got in the school. Admittedly, I started a bit late: I was late getting into the conservatory, and a bit late into piano tuning school, and a bit late into building instruments: I was 33 or 35 when I built my first one. I’ve now been doing it for 20-25 years.”

It was apparent early on that McNulty had the knack for the construction of early period instruments whose secrets had largely been forgotten. He was particularly interested in a Anton Walter fortepiano other builders had been trying to ‘resurrect’. At the time information was scant.

“In 1979 there was this drawing that was freely available of this five-octave Anton Walter – Mozart’s piano maker. Most people who were attempting these things in 1980 were using that drawing. The unfortunate thing about that drawing is that it leave many things unregistered: the thickness of the soundboard in particular.

“I encountered a fellow in Amsterdam who in 1985 had a Walter open and then closed it up. And I asked him about the soundboard thickness and he said it was ‘normal.’ I personally got to take apart a Walter in 2000 and to make all my own measurements to literally reproduce them.

Of course, achieving authenticity is only ever an estimate but if the sound is gratifying and complex qualities of the instrument emerge, it is clear one is on the right track.

Paul McNulty again: “It is only as enough studies of the antique instruments emerged that anyone could begin getting close to getting a satisfying sound. They explored the range of colours, the particular characteristics and this is something that emerges in the quality of the writing.

“The instrument also influenced how they composed: when Mozart received his Anton Walter in 1782, a big sounding instrument, from that time forth he began to write concertos with a larger orchestral texture. Because he could. So, he was extremely aware of the capacity of his instrument and he wrote for nothing else.”

Here is how McNulty describes the sound of the Viennese fortepianos.

“If you talk about the classical Viennese sound, it has a more pronounced attack because it is leather hitting the strings and it has a more rapid decay and fundamentally it has a much clearer and consonant sound in the bass because the strings are so thin.”

For the builder and also for the performer recapturing the past is part of the adventure. Stanley Hoogland is a Professor Emeritus at the Conservatories in the Hague and Amsterdam and a specialist in the fortepiano. On a line from Amsterdam, he described for me both the beauty and complexity of playing historic replicas.

“In one way, the instrument plays a little lighter and easier, technically speaking, but also involves more precision in your fingers and hands. In one way it is easier, but the precision is more important. Also, an additional action is needed to create sound on the fortepiano, this is something that has to be studied and learned.

“You feel very happy to feel the connection between the instrument and the composition: there is a sort of natural thinking about it musically and there is no difference between the composition and the instrument and it is all the same. It is very enlightening for listeners and I think they appreciate they can learn about things that are usually hidden from the modern player.”

There is also an inherent risk, as any purist of early instruments, whether a maker or pianist, will admit: the further one follows down the path, the more difficult it becomes to listen to or to play some composers on the modern grand piano. Stanley Hoogland again:

“The longer you go back in history, the more problematic it gets. To play Mozart on modern instruments is quite problematic, for instance. But later, such as in the mid-19th century, the differences are not so great anymore and the difficulties are fewer.”

Professor Hoogland commissioned his own fortepiano from Paul McNulty in the mid-1990s. Here’s how he describes it today:

“He was building it and I was present during the process. What was striking was how much work and the amount of time he put into making the soundboard. That was a very precise achievement and I was struck by the richness of the sound. I remember that very well.”

The instrument turned out to be the last model the American built before settling in the small village in the Czech Republic he now calls home, some 60 kilometres southeast of Prague. McNulty had heard about impressive wood from Šumava which was perfect for production, so he set up shop here. “My neighbours called me ‘Robinson Crusoe. I bought this place… and plugged in a toaster… and tossed a mattress on the floor and that was it! If I wasn’t working, I was reading. That was my routine!”

Building a single fortepiano is nothing if not time-consuming: the treatment of wood alone has to be long planned out, with boards, for example, being left outside for five years before the drying process begins, long before wood is ever laid out and shaped in a workshop. One single piano requires around 1,000 man-hours to make and when he got his start in the Netherlands, McNulty made his instruments on his own.

“You just simply have to keep going and going. It’s a full-out, flat-out effort!”

After he moved to the Czech Republic, he continued production in the workshop he created on the grounds of an old ‘statek’ – historically an enclosed property common in South Bohemia and the Czech-Moravia highlands. But the piano maker was by no means ‘cut off’, and eventually among his clients he was sought out by Russian-Canadian pianist Viviana Sofronitsky. Viviana describes the instrument she wanted.

“When a musician wants an instrument, I believe they want the best. Like every violinist wants a Stradivarius. I was looking and looking, in America and in Europe and I made a short-list of instruments that I liked. When I came to the conclusion that McNulty was the best maker; the process took two years and when the piano was finished I went to pick it up in person so that I could ask him how to take care of it.”

Paul – “She came and she wanted a little something done with the hammers and I said ‘oh sure, I can do that’. But it meant working through the night because she had a concert the next day in Berlin. But realising that she was putting me through an all-nighter, she stayed up herself, helping me change the leather on the hammers and so on. And this led to a fateful commitment.”

Viviana – “I had no desire or any inkling that I would ever come here again. But when I saw the piano I was thrilled. It was even better than I expected a wonderful instrument. And here something else happened I guess!”

They have been together ever since.

Paul – “She is the intellectual master of the fortepiano as well as the factory. You know, I supply the knuckles and wrists and elbows, and she is the brain. Without one or the other, both would collapse.”

Currently, McNulty is on schedule to produce 14 new pianos, complete with high-quality metalwork commissioned out. That’s just one year. A single fortepiano costs around one million crowns and McNulty focuses on five models or so, including the Walter already mentioned, a Graf, a Pleyel which was used by Chopin and a Boisselot which was owned by Franz Liszt. According to Viviana Sofronitsky, the aim is not to get rich but to be able to provide instruments for those wanting to perform.

“Our goal is something different. The mission is to present beautiful music to people. Of course we need money, but it is to continue doing what we do. To pave the way for beautiful music, not to produce money. If money was the only aim, I hope that I would be practical enough to make it some other way.

“I really hope that we can continue producing beautiful pianos because I feel we are at a historic point when Early Music and Early Music performance sometimes looked down upon by modern pianists, will join all music together. It will be just music and for me that is a moment of promise and I am proud to be a part of it with Paul.”

Workshop
Back to previous page

info@fortepiano.eu & v.sofronitsky@web.de
(To be sure your email reached us, please use both addresses)
We always answer within 24 hours — if you don’t get reply please contact us by telephone number.

Thank you! Your submission has been received!
Oops! Something went wrong while submitting the form.
© Paul McNulty fortepianos
Made in EU